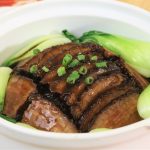 INGREDIENTS FOR THE SAUCE

INGREDIENTS TO SIMMER THE PORK