Today we are making a traditional Beijing recipe – Peking Sauce Pork. According to my research, it has a fun story of how it was invented:

There was a grandfather raising his grandson. During Chinese New Year, the grandson wanted to eat Peking Duck- the most famous food… but they were too poor to afford that. So, the grandfather used the same sauce that is used on Peking duck to cook the pork and he prepared it in the same way how you would eat Peking duck (with the spring pancakes, lotus leaf buns, cucumbers, julienne-d scallions). The grandson really like it- they had a wonderful Chinese New Year

If you want to taste some of the flavors of Peking duck without all the work and cost, try this recipe:

Note: Product links below are affiliate links. I may earn a commission if you purchase an item on a linked website within 24 hours. 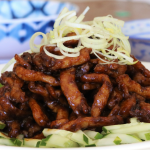 INGREDIENTS FOR THE MARINADE

INGREDIENTS FOR THE SAUCE

INGREDIENTS FOR THE SIDES

INGREDIENTS FOR THE STEAMED LOTUS BUNS

INSTRUCTIONS FOR THE PORK

INSTRUCTIONS FOR THE STEAMED LOTUS BUNS