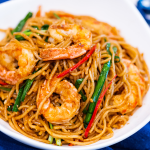 This garlic shrimp lo mein easy recipe and quick, can be put together in 15 minutes. we often make it with egg noodles, but you can also use pasta or ramen noodles. The key to perfecting this recipe is to mince the garlic as fine as possible so the garlic bits can cling to the noodle strings.
Servings: 2 people

To Marinade the Shrimp

To Complete the Noodles